You find me at some sort of milestone. I don't think it can be considered a true achievement, but it's not nothing either:

I've written a blog post every year for ten years.

It feels peculiar because here, in the midst of the coronavirus pandemic, time seems distorted.

Hanging out with friends, visiting other countries, travelling to work, seeing my family. It all feels so far away, in both directions.

It has been alarming watching the situation unfold. Graphs abstract away the realities; so many people lost, so many lives affected.

Tabloids tout the easing of lockdown whilst our heavily-cut healthcare system tries desperately to hold together.

I can't remember what I have done at work for the last year.

Hold tight, I'll take a look at my commits on GitHub…

Huh! Turns out I actually shipped quite a few things: user notifications, a new contacts profile page, a new bulk file uploader, and in-place contact creation. And I updated Rubocop at least a billion times.

Most of this work involved learning more React and also learning Jest and Testing Library1 and fell under my newly realised role of "Developer that works on making a website that is a lot like other websites so people aren't surprised by it". Catchy.

I think there are two reasons why I don't remember what I did this year:

When we discovered that not one but two cats would frequently wander past our window, it became a project to try and convince them that they would have a lovely time if they came through and into the office2.

Brindles3, although timid at first, eventually became quite friendly, and would stand by the window for a stroke or come in and lounge on the carpet in the sun. Before we left for lockdown, we had only seen Brindles a few times recently.

Grey Cat4, on the other hand, came in to the office and decided that it owned the place. It is a terrible jerk. Hissing and shouting, taking swipes at your leg as you walk past, refusing to leave and then back the next day to do it all again. If Grey Cat were a person, HR would have got involved immediately because of this behaviour. However, we don't have an HR department and also Grey Cat is a cat.

We left the office and started working from home on 12th March, over a week ahead of the UK lockdown. We are adapting and adjusting as best we can. Slack and Basecamp are invaluable for keeping us talking, and planning our work asynchronously. Emma kindly bought me a standing desk, and I picked up a handsome keyboard, so working from home is as comfortable as can be.

As a life-long web developer, it seems like a no-brainer to build a tool like Consonance as a web application. Now, in These Strange Times, a publishing management tool that is natively built on the web and can be accessed from any computer is something of a rare commodity. It feels a bit icky, but we might actually find some new customers from all this chaos.

I have, thankfully, returned to running. It is a great relief that I can get out and stretch my legs. I had signed up for another jaunt around Hackney but that will have to wait for another time. For now, I am working on speed and having a nice time.

Oddly enough, I got a bit in to the gym. After using it to strengthen my knee, I started attending various classes, with worrying names like MEGA STRONG CORE and INTENSE HIITING, but had a really fun time doing so. I even got a personal trainer to help me progress further towards my life-long goal of completing a single unassisted pull-up.

We did another week of snowboarding, back to Austria this time. Fewer of us were able to attend this year so it was a quiet but no less enjoyable affair.

Having previously visited Prague on a stag do, I knew that it was a place I wanted to explore further, so Rach and I spent a nice week there, eating vegan doughnuts and running to the top of a hill to see a big statue of a horse.

The painting of tiny plastic army people has continued in earnest. I now have just over 1,500 points of T'au Empire painted, and have started work on a Chaos Space Marine warband for my next army. Which are words that mean something to some people.

Matt and I booked in to a (now postponed) tournament and started to get in a lot of games at Tabletop Republic to prepare. I'm looking forward to getting back to rolling dice with my bro as soon as it is safe.

I never did write a blog post about Paint Pad.6

The site officially launched in July 2019 and I spent the following few months gradually adding features and importing new paint ranges. Effectively though, Paint Pad was "done". It did everything that I set out to build, and I was preparing to down tools and start another side project.

Then, the day after Boxing Day, something a bit mad happened. Something best expressed by the following graph: 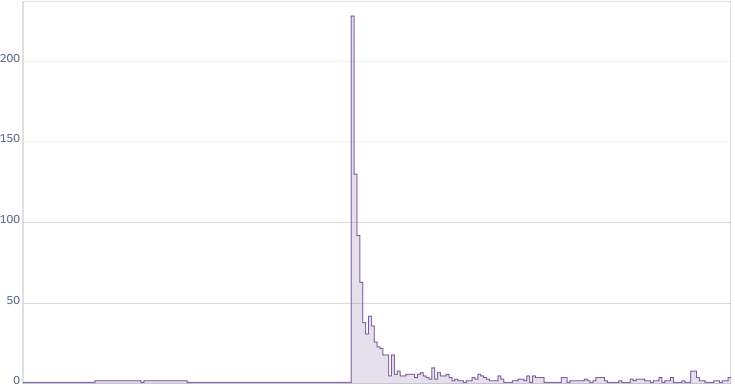 See that quite-difficult-to-miss spike? That's the result of Uncle Atom giving Paint Pad a Tabletop Minions Award and featuring my little website in a video that has now been viewed over 30,000 times. The day the video went live, two hundred people signed up, and new people have been joining ever since.

What followed was a steady stream of people saying really nice things about the thing that I made, and actually using it in the way I had intended. I am still humbled and excited when I visit the site and find that another kind and talented painter has published an exceptional new recipe there.

Now, I'm not saying I am motivated by the adoration of strangers, but that other side project I mentioned has been put on the back burner and I'm going to spend the rest of the year adding new features to Paint Pad…

I always write this section first because it doesn't actually require any writing.

Here are some things I have liked over the last year, I have added YouTube and Twitch, as things that I like exist on both of them.

Rach and I broke up two weeks ago.

I can't say that it was a shock. Things had felt different for a while, but I was too scared to say anything, fearful that speaking the words out loud would inevitably collapse the wave function.

It is a sad time, but also feels like a weight has been lifted. It has been an incredible few years with someone I truly adore. I am thankful for the time we spent, the memories we made, the people I met and the other family I was part of.